Vermiculite and Isoperl® as a feed and carrier substance 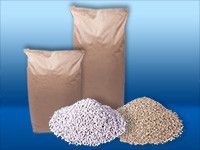 Vermiculite has been used for several years in feeds, e.g. for conservation of silage or in piglet, cattle, horse and poultry breeding.
Vermiculite is mixed with propion and formic acid which produces a granulate with a fungicide effect which improves the fermentation process.

Due the property of vermiculite to bind large quantities of fluids (up to 600 %), rinsing is prevented as takes place when using liquid acids for example.

With the use of this feed substrate, the formation of mould and the produced toxins is prevented.

Both substances can be mixed with each other using screw-conveyors.
Vermiculite is consumed by the animal as part of the silage and supports the intestinal flora in the digestion process. The grained structure of vermiculite helps to release the nutrition. Furthermore, vermiculite prevents diahorrea and provides valuable minerals.
The use of vermiculite as a vitamin carrier for fluid vitamins is also conceivable. (E.g. Vermiculite D6 for humans and Vermiculte-Staufe for animals).
Vermiculite is safe to health and can be used without any restrictions.

Isoperl®-2 and Isoperl®-5 are frequently used as substrates for liquids, as for white products such as milk powder products and urea, and are also approved for organic and ecological feeds.

Isoperl® is also used in formulas in which you want to achieve a good anti-caking effect (no clumps) with small quantities of additives. Due to the structure of Isoperl® it is easy to link and is therefore used as a filler in rubber processing (toothbrushes with rubber ribs with Isoperl® ), abrasion coats, abrasion pastes (toothpaste for professional teeth cleaning) and in the paper industry etc.